God’s ALL in when it comes to your taking it to the devil. He’s done everything He can to fully weaponize you, so you can put a stop to the enemy’s stealing, killing and destroying (Ephesians 6:10-18).

However, as with any fight, victory only comes when you’ve got the right weapons and strategies in place—and—the confidence to use them. That’s why, when you’re in a fight against any kind of sickness or disease, it’s just as vital to build up your spiritual confidence as it is your natural immunities. 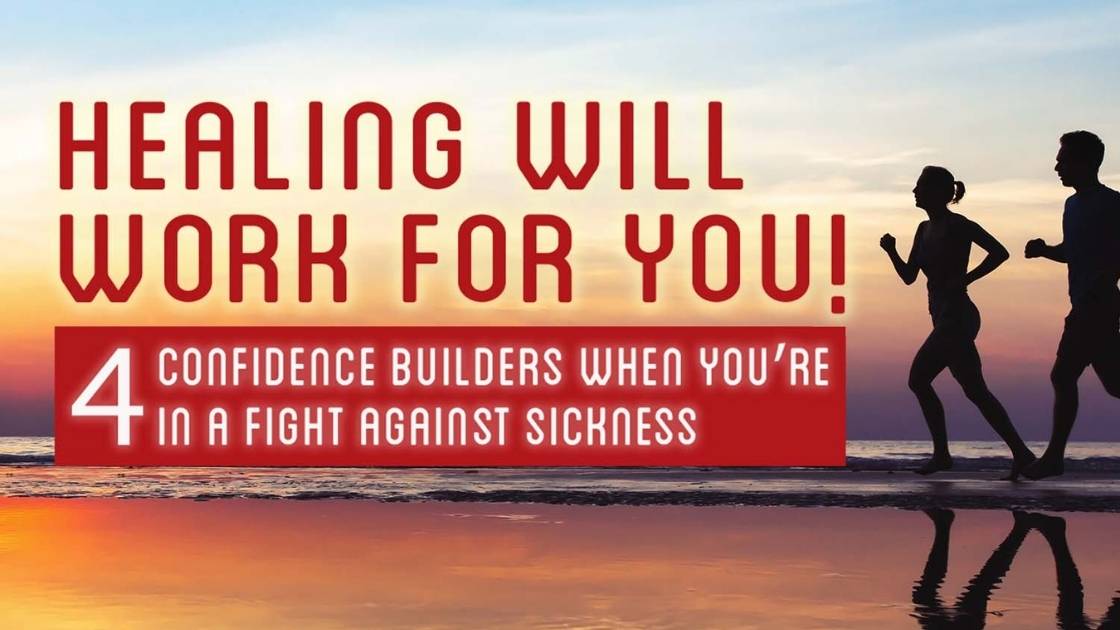 Here are four confidence-builders that will help you dig in, stand your ground and push you over the top anytime you have to face off against the enemy when it comes to your health or that of someone else. Healing will work for you!

Confidence-Builder No. 1: Jesus Is Our Champion Healer

“When all the people were being baptised, Jesus was baptised too. And as he was praying, heaven was opened and the Holy Spirit descended on him in bodily form like a dove. And a voice came from heaven: ‘You are my Son, whom I love; with you I am well pleased.’ Now Jesus himself was about thirty years old when he began his ministry.” –(Luke 3:21-23, NIV)

If you did a quick read of the books of the Bible written by Matthew, Mark, Luke and John, or a random survey of today’s mainstream Christians, the one major theme that would likely stand out in the ministry of Jesus is the fact that He was a Healer—because healing people was something Jesus did a lot.

It’s often been thought—and taught—that Jesus focused so much on healing because He needed to prove His divinity (as if He had to earn the right to sit at the throne of God!). But that’s not true.

Besides, Jesus never openly discussed His being God in the flesh. He only spoke and ministered to people from His identity as the Son of Man (one of us), which is how He typically referred to Himself. In fact, take a closer look at the Gospels, and you’ll find Jesus never took credit for any of the supernatural signs and wonders performed during His ministry.

Not long after He was baptised (Luke 3), Jesus arrived at His hometown and announced: “The Spirit of the Lord is upon me, for he has anointed me to bring Good News…” (Luke 4:18-19).

From that moment on Jesus attributed all signs, wonders and miracles to His Father—“My Father who lives in me does his work through me,” He would often say (John 14:10).

Jesus never healed anyone; the Holy Spirit working through Him did. It wasn’t Jesus’ ministry. It was the Holy Spirit’s, which was a critical distinction because of what was about to happen. An important handoff was about to take place, one that would impact our lives 2,000 years later. It was a handoff that would leave no doubt in our minds about “healing”—and our role in it.

Confidence-Builder No. 2: Healing Worked for the 12

“Jesus gathered his twelve disciples and imparted to them authority to cast out demons and to heal every sickness and every disease…. ‘As you go, preach this message: “Heaven’s kingdom realm is accessible, close enough to touch.” You must continually bring healing to lepers and to those who are sick, and make it your habit to break off the demonic presence from people, and raise the dead back to life. Freely you received the power of the kingdom, so freely release it to others.’” –(Matthew 10:1, 7-8, TPT)

As our Champion Healer, Jesus wasted no time in demonstrating to His disciples God’s love and compassion through the ministry of healing. Then He released them to go and do the same—“freely!”

Empowered with authority, a simple message and a whole lot of power, off the 12 went. By Luke’s account, God’s plan went as expected…

“The apostles departed and went into the villages with the wonderful news of God’s kingdom, and they healed diseases wherever they went” (Luke 9:6, TPT).

Where there had only been one person through whom God was able to “do His works” (Jesus), now there were 12. More importantly, however, God had established a precedence, a pattern, a new way of building and advancing His kingdom. We find the blueprint to it laid out in Matthew 9:35 (NIV), just before Jesus deployed His disciples:

“Jesus went through all the towns and villages, teaching in their synagogues, proclaiming the good news of the kingdom and healing every disease and sickness.”

God sent Jesus into the world to redeem His relationship with mankind—and to destroy the works of the devil (1 John 3:8). And one of God’s primary strategies to bring the devil’s works to an end was healing…

“God anointed Jesus of Nazareth with the Holy Spirit and with power, who went about doing good and healing all who were oppressed by the devil, for God was with Him” (Acts 10:38, NKJV).

With a working strategy in place and an easy-to-follow pattern that had been well-tested, it was time for Jesus to execute the plan with His original 12 disciples—and it worked. But that was just the beginning.

Because just before Jesus sent His soon-to-be 12 apostles (or 11 since Judas never became an apostle), He charged them with this:

“The harvest is plentiful but the workers are few. Ask the Lord of the harvest, therefore, to send out workers into his harvest field” (Matthew 9:37-38, NIV).

Confidence-Builder No. 3: Healing Worked for the 72

“The Lord now chose seventy-two other disciples and sent them ahead in pairs to all the towns and places he planned to visit. These were his instructions to them…. ‘Heal the sick, and tell them, “The kingdom of God is near you now….”’ Then he said to the disciples, ‘Anyone who accepts [you] is also accepting me. And anyone who is rejecting you is rejecting me.’” –(Luke 10:1-2, 9, 16)

Apparently, the 12 disciples took Jesus’ prayer request for “more workers” to heart and got after it. Because not long after they returned from their mission, Jesus was able to commission and send another 72.

And how did that go for them?

Luke 10:17 tells us, “When the seventy-two disciples returned, they joyfully reported to him, ‘Lord, even the demons obey us when we use your name!’”

The pattern established by the One worked for the 12, and now the 72. One major difference, however, was that the plan and the pattern had developed into a persona—72 “personas,” to be exact.

Jesus had told them, “Anyone who accepts [or rejects] you is also accepting [or rejecting] Me.” That meant there would be no distinction between Jesus and the 12 or the 72. The same Holy Spirit would operate effectively through them all—the same anointing to teach, preach and heal—yielding the same results.

Once again, the plan worked and the results were exponential, but soon the real test would come. Before that, however, Jesus had to challenge His disciples to reach for an even higher level:

“Anyone who believes in me will do the same works I have done,” He told them, “and even greater works, because I am going to be with the Father” (John 14:12).

Jesus threw a lot at His disciples in that one statement, but time was short, and He needed them ready for His departure—and His leaving them behind wasn’t at all how they imagined this playing out.

But the real shocker was the idea that, with Jesus gone, how could they possibly do MORE, more than what they had already experienced?

Full disclosure came when Jesus went on to tell them, “I will ask the Father, and he will give you another [Helper], who will never leave you. He is the Holy Spirit, who…. lives with you now and later will be in you” (John 14:16-17).

Jesus knew “greater works” would come with the Holy Spirit. So, with some experience under their belt and Jesus’ complete confidence in them, the disciples were ready to pick up where He would leave off—and now, there wasn’t anything they couldn’t do!

Confidence-Builder No. 4: Healing Will Work for You

“It is the same Holy Spirit who continues to distribute many different varieties of gifts…. different kinds of miracles that accomplish different results through each believer’s gift and ministry as he energizes and activates them. Each believer is given [public manifestations] by the Holy Spirit to benefit not just himself but all.” –(1 Corinthians 12: 4, 6-7, TPT)

By now you’re probably figuring out that everyone Jesus called and ordained into His ministry, was primarily set against sickness and disease. It was His branding then; it’s His branding now.

The question is: Who are included in the “called and ordained”?

Jesus’ parting words to His disciples answers that question:

“Go into all the world and preach the gospel to all creation. Whoever believes and is baptised will be saved…. and these signs will accompany those who believe: In my name they will…place their hands on sick people, and they will get well” (Mark 16:15-18, NIV).

If you are “saved,” then God fully intends for healing to accompany you, follow you, be with you. He never intended healing just to accompany Jesus, or the 12, or the 72. He intended it for EVERY believer.

What’s more, God doesn’t intend for healing just to be for you—for your benefit only. He expects YOU to minister the benefits of healing to others.

To qualify as a disciple of Jesus, you only have to do one thing He said:

Along that journey as a “follower” of Jesus, you can have confidence in the fact that healing is in your future, whether you need to receive it for yourself or minister it to someone else. Either way, you can trust that it’s always available to you.

Today, Jesus is sending us to do what He has directed ALL His disciples to do—simply follow the path He forged for us. As we do, it will always take us down the road of healing…for our good, and the good of all. You can be confident of that!

Sign up to the ‘Path to Healing’ study course 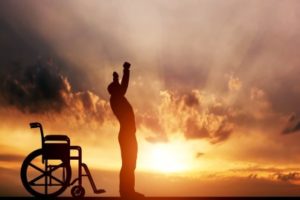