January 2022 was the start of Partner Communion Services at KCM Europe, with Partners meeting online each month to break bread and partake of the cup.

40 years earlier, Kenneth Copeland paved the way of these online services, leading the first ever World Communion Service that took place via satellite from the Fort Worth Believers’ Convention in Texas, being held in the Tarrant County Convention Centre. This service was broadcast by satellite to 200 locations in the United States and 20 cities around the world. Until then, the technology had not even existed to support such a service.

The convention centre was packed to capacity as the satellite feed sent images of Dr. David (Paul) Yonggi Cho and his congregation to a huge screen. The group in Korea saw, via satellite, the crowd in Fort Worth. 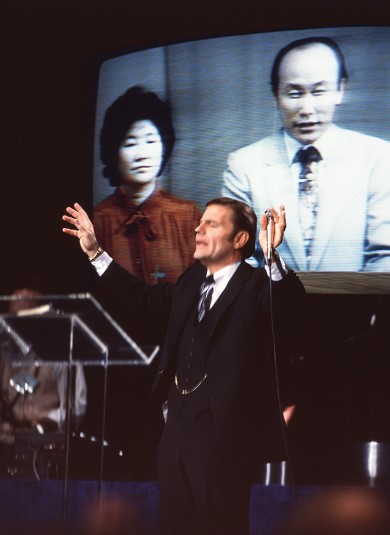 Kenneth Copeland calls the significance of our blood covenant with God “One of the most powerful truths I’ve ever seen in the Bible.” It’s a covenant between God and Man – the most sacred of all unions, first cut with Abraham, later complete in Jesus.  And today, we remember the blood of Jesus and all He did for us by partaking in communion together.

Forty years ago, on Aug. 28, 1982, Brother Copeland taught about this powerful blood covenant, not to a church or in a convention… but to the Church—in what was considered by many at that time the single largest gathering of the Church since Pentecost.

Believers around the world joined Brother Copeland in Texas, and Dr. Cho, Pastor of the largest church in the world, in Seoul, South Korea, via a “split-screen” picture feed, for Brother Copeland’s powerful message on the blood covenant, which was followed by unified Communion. Together the two groups, along with believers in 218 other locations worldwide, took the most sacred sacrament of Communion.

This history-making event was called by technologists a “first in communications history—the largest closed-circuit television broadcast ever.” A consultant from NASA stated that, “This is the beginning of a new phase of Christians utilizing technology provided by God through the Space Program…. The International Indian Ocean, Atlantic and Pacific satellites, as well as the Western Union and RCA satellite systems will allow the World Communion Service to literally surround the globe. The magnitude of this project will require more than 600 highly trained people throughout the world.”

In the days leading up to the Communion service, Kenneth Copeland said his vision for the service was “to see the largest number of Word-oriented, faith, heart-felt, strength-believing Christians learning new and vital things about receiving from God through Communion. I can see a great manifestation of the meeting of people’s needs— spirit, soul and body—on a greater level than ever before.”

Gloria Copeland projected it to be “the greatest healing service within the Body of Christ.  As we join together to receive Communion, we know the Spirit of God will be in our midst to minister to every need.”

“If ever there was a message worthy to share through every voice,” said Brother Copeland, “it’s the message of the blood covenant God offers to us.”

Brother Copeland and the other Ministers of the gospel, were truly anointed to pave the way for the future of the Ministry and for believers’ worldwide. KCM continues to operate successfully in the forefront of media and technology as we follow in the footsteps of a prophet.

Our Partners are the heart of this ministry, which is why Kenneth and Gloria Copeland and the entire KCM staff pray for their Partners daily. When you become a Partner with KCM Europe, you will receive a monthly letter from Kenneth Copeland that is full of prophetic insight and teaching.

You can learn more about Partnership HERE