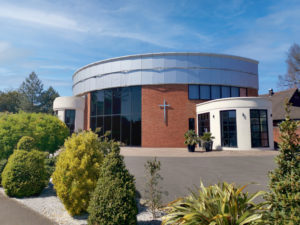 My name is Rob Andrews, an assistant Pastor at Cornerstone the Church, Walton on Thames, which was honored to be one of the 12 churches featured on this year’s KCM calendar.

The first Sunday in January, a very nice couple came, who are partners with KCM and were looking for a church to join as they had seen the calendar and realised that we were about 45 minutes away.

The last Sunday in January just prior to the start of the service I turned around to say hello to this couple and they introduced me to a couple who they had brought with them.

I said, ‘Welcome, where have you come from today?’ and they gave the name of a small village also about 45 minutes away. Then I said, ‘I know someone from that village, a friend’s mother.’

I had been wondering how to contact him as he went to live in Canada and I to Romania in 1992 long before email existed.

I told her his name and she exclaimed that’s my son! We hadn’t recognised each other.  God used this calendar to bring us all together again after 30 years!

Now, the couple I first mentioned, have a sister in Sweden who is a believer, yet her husband doesn’t yet believe. So she asked them to ask me to pray for his salvation and healing as he had been unwell, so in Cornerstone the Church tradition I invited the whole church to pray for him during the service and then we continued with the service.

The service was live streamed and the next day the sister in Sweden said that they watched the service and then her husband went to bed and couldn’t sleep, coughing for about 3 hours, so she said to herself, ‘I will pray that thing out of him,’ and she did.

The next day he said, ‘That did the trick didn’t it!’ These were the first words that he had spoken for 3 days as he had been so unwell!

Thank you KCM on behalf of our senior Pastors Chris and Loraine Demetriou and the whole congregation for this prophetic calendar which I believe is a blessing not only for us but for others all over the United Kingdom and beyond.